I haz a character type

I have a confession: I'm addicted to blonds in fiction. But I didn't really know how big of a fancy I had for them until I thought about some of the favorite characters I've read in books or seen in their TV shows or movies.

I have a character type-- an almost-without-fail love of blond characters (mainly male). Not just blonds, but shaggy blonds.
Also, they're usually asshats. 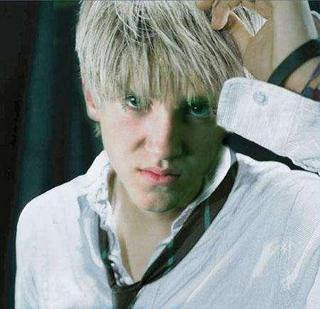 Since the day I picked up Harry Potter and the Sorcerer's Stone nearly twelve years ago, I had a fascination with the character of Draco Malfoy. Maybe it's the badboy in him, maybe it's the mystery. But whatever the case, he got me started on my closet fanfiction real fast.
His thousands of screaming fangirls prove that I'm not alone in that.

And speaking of fangirls, how about that Eric Northman.

For anyone who has read the books or watched the show, it's not hard to see why he also has a mass of followers, including me.
More mystery, more tragic backstory, more bad boy appeal. These character traits tend to suck people in like a blackhole. One of the many unanswered questions of the universe.
However, not every blond I like is a bad boy. Quite the opposite. My favorite character in any book I've ever read happens to be one of the sweetest ones.
No surprise that boy is Peeta Mellark.

And Peter from The Chronicles of Narnia. Both show endearing sides with emotions and devotion. 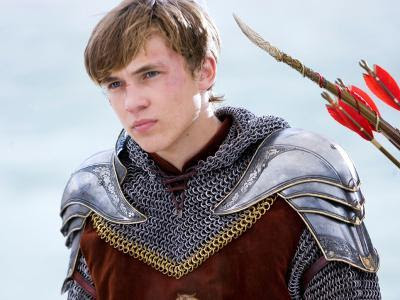 Not only do I tend to favor guys with certain styles, but some of my favorite female characters tend to fall into similar categories. Smart, outgoing, and loyal brunettes.
Like Hermione Granger and Katniss Everdeen.

So here's the thinking part. Do you guys tend to favor certain physical aspects of characters? Does it make you biased? Or is your taste in characters completely random?
Can't wait to read everyone's polls. :)
Posted by Leah at 7:48 PM

Labels: blonds are made of win, book characters, I wish I was as cool as Miss Everdeen

I really liked Draco, too, and the actor who played him. I hated what they did with his character in the movie version of Prisoner of Azkaban--you know, how they made him really snivelly. He needed to be a viable rival and/or threat to Harry, and I felt like they undermined that.

I am not usually attracted to blonds, but yes yes yes to Eric Northman. And Spike!!!

Ohhh I sad SUCH a crush on Draco when I was about 11.

(And I'm engaged to a blonde boy!)

You know how to pick 'em.

I don't know if it's a hair thing or not, but I'm in the same boat with you about Hermione and Katniss--two of my all-time favorite girl-heroes! I'm adding Sabriel to the list who, incidentally, has black hair.

I have a thing for the dark-haired boys, though. And I love the bad girls. Mostly, though, I try not getting biased and all, but sometimes...

Yeah, for awhile I seemed to favor blond, so a buddy of mine, who is like my 2nd mom to me, said, "What the heck is up with all the blonde girls?" So, I went back and changed. It seemed to be that way more with blonde girls and then dark haired guys. I think I've tried to spread the hair color love, but I find my MC in my YAUF and my Dystop both have auburn hair....hmm...lol

As for Draco, I didn't start loving him until HBP. The tortured soul, and damn, does he look fine in black!!! I so wanted him to get reformed!!

And I totally switched my Gale and Peeta characteristics when I was reading....I pictured Peeta dark haired...must mean something about me! LOL

I have a thing for writing dark haired guys. Guess in my head it goes along with the bad boy image, but Eric Northman...yeah...SIGH.

After watching the TLTW&TW movie, I admit I had to hightail it to IMDB.com and check Peter's actor was legal! I like the nice boys too, the Peetas and the Peters -- I married one, and I love them in fiction. I'm always a sucker for a bad boy with vulnerabilities, so long as he stays in a book. They're hard work IRL!

I love dark-haired boys, so no matter what the description of a boy is, if I love him, I see him with dark hair. Peeta's an example of this. I know he's blond, but he never was in my head. As for personality, uh, I kind of love all boys lmao. I really do though, bad boys, nice guys, Casanovas, they're all good in my book :)

Well, I don't have a character type. I've never thought about it, but with every MC I've tried to change their looks so no two look alike.

I do always have a bad boy character, and have a thing for them. Good thing I married one, although he's mellowed with age.

I definitely have character types, but they aren't really based on appearance. More on personality. For example, I love villainous male characters that really have heart. For example, Severus Snape, the namesake of my future black haired German Shepherd.

With female characters, I definitely agree with you. Hermione is my HERO! I also love Katsa from Kristin Cashore's Graceling, which I recommend to basically everyone I meet.

My Draco fangirl crush kicked in with HBP. Every time I see that movie I want to jump into the TV and give him a hug at the bathroom scene.

I'm not really attracted to any hair color in characters specifically, though I do tend to go for the strong and/or sarcastic guys (Jace, Will, Gale) or the sweet nerdy guys.

Angelica--Oh man, I forgot all about Spike. What's wrong with me?!
He's worth fangirling for too :D

I have a weird thing for male characters that aren't supposed to be good looking, like Raistlin from the Dragon Lance series and Achmed from the Rashpody series. And I guess they're both bad guys with some heart. That and I tend to like dark haired guys.

As for girls, I think a lot of my favorites are red heads (like me) like Alanna from the Tortall series and most of female MC are red or auburn haired.

I usually fall for the dark and mysterious male characters, but when writing I tend to create more of the boy next door type guy (also brunettes). In real life I often swoon for the blonds but almost always date brunettes, so go figure.

Good topic though. Now I'm thinking I may need to start writing a different type of male.